I left Altoona, IA around 10:30am, intending to meet up with a fellow chaser Andrew and his wife in Omaha to look over data. We hung out at a Jimmy John’s in Council Bluffs for a few hours, watching the latest model runs. Everything pointed to a nasty MCS with embedded supercells – certainly not the best thing to be chasing, but we could always hope to get an isolated cell before the whole thing got messy.By 3:30pm we still had a lot of cloud cover preventing surface heating at our location, so we decided to head 25 miles south to Plattesmouth NE, where satellite visible imagery showed clearer skies. It was certainly getting steamy down there, but the incoming cold front wasn’t moving as fast as we thought it would – it was still about 75 miles west of us at its closest. What to do?

A line of cells started popping in north/central Kansas, the last place we thought they would begin since there was significantly more atmospheric capping over that area than in ours. There wasn’t much shear down there, either. Still, the cells were moving northeast and would soon enough be in central Nebraska, in a *slightly* more sheared environment.

Decisions had to be made – head another 100 miles west to intercept those cells, or wait until the cold front pushed closer to where were were sitting (which was a higher-sheared, higher ML-CAPE “tornado-friendly” environment) and see what developed?

I chose to dance with the girl I could see rather than wait and hope for a prettier one to show up. I split off from Andrew and headed west about 75 miles to position myself just west of Lincoln, barely in time to intercept the first of the cells which had spawned in Kansas. Several of these cells were severe-warned already and – surprising nobody – they had already begun to congeal into a huge HP (High Precipitation) mess. This is the general theme for all of my Nebraska chases in 2014.

Andrew had driven in all the way from central Illinois that morning, so he had higher stakes in heading west with me as it would take him even farther away from home for what looked to be an HP crapfest with little chance of spinning. He chose to stay in place, but later told me that shortly after I had departed, the sun went behind the huge anvils generated by the storm system I was heading to, effectively cutting off any additional solar heating in his area and causing his trip to be a total bust.

After pushing through about 5 miles of moderate rain on the leading edge of this crappy system,  I decided this was going to be a rainy, messy bust like most of my Nebraska chases this year. My son lives in Lincoln and I hadn’t seen him for nearly 9 months so I decided to quit chasing this system and instead chase a better relationship with my son. We agreed to meet for dinner in Lincoln.

As I was pulling into Lincoln (and of course, not in any sort of position to get a decent picture within the city) the rain suddenly stopped, revealing an ominous shelf cloud attached to a nicely rotating “stacked plates” meso. I managed to fire off a few shots, but I knew if I didn’t pick up my son ASAP, as soon as that thing went overhead we were going to be caught in a torrential downpour.

Literally within 10 seconds of my son getting into my passenger seat and closing the door, the gust front went through followed by very heavy rain and gravel-sized hail.

After tromping through 6 inches of water from localized flooding, we had a nice meal at a local pub (Dempsey’s) before I headed back home near sunset. I was now on the back side of a huge squall line that stretched from Kansas to Minnesota. Fantastic lightning show in front of me all the way home.

Technically this chase was a bust, but sometimes life is about more than chasing so I am going to call this trip a total WIN. 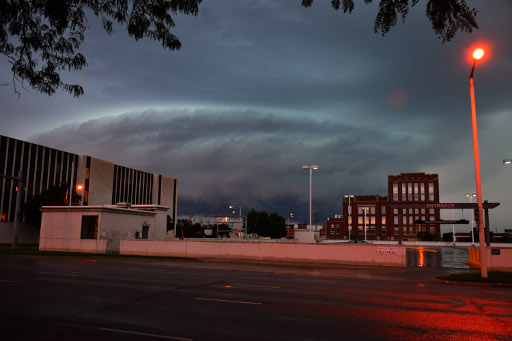