The SPC showed moderate possibility for supercells near the IA/MN border. I took off WAY too early and ended up hanging out at the Kentucky Fried Chicken in Clear Lake IA, staring at weather data. The HRRR showed stuff popping mid-afternoon up near Albert Lea along the frontal boundary, so I headed up that way to camp for a bit. A few towers showed up in the Albert Lea area, moving slowly to the SE. I picked a cell and followed it into Northern Iowa. It was weak and didn’t look like it would do much, so I used the opportunity to hang out and take some pics of farms, general July 4th Americana, etc. up near St Ansgar and Northwood.I missed my girlfriend and decided to head back home. Meanwhile, I could see a long line of cells fire up to my East (heading SE). They were definitely in a line and somewhat discrete (maybe 8-10 cells visible at once) but they all appeared weak. Photogenic, but weak, with low tops and high bases (pic below).  No visual or radar-indicated mesos. I decided to blow them off and head home. As I arrived home around 8pm, I see that a friend of mine caught a tornado with her cellphone near her farm. There were also tornadoes near Traer and the general region near Monticello, IA. One was EXTREMELY photogenic, per a pic posted to StormTrack. I don’t feel bad for not chasing, because there was NOTHING to indicate any of these cells would drop a tornado. I had a nice day to myself taking pics with my new camera. 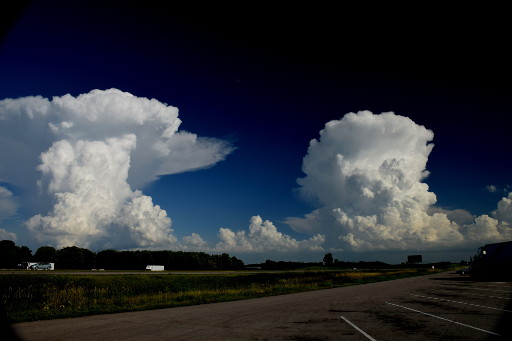