I hooked up with Eric M. from Overland Park KS. The original plan was for him to come to my house in Altoona and park, then we would take off together for North/Central Iowa, but the 9am HRRR run indicated isolated supercell potential around Beatrice, NE so we decided to meet in Rock Port Missouri with the intention of starting in SE Nebraska, then chasing into SW Iowa. Confusing, right? I need to point out that the HRRR, NAM and GFS models were all over the map that morning, making target choice difficult.By mid afternoon it became obvious nothing was going to happen in our area, and some slow-moving cells were popping up North of Omaha so we rapidly carefully headed North on Iowa back roads. We intercepted a radar-indicated tornado-warned cell North of Persia, IA and we were luckily ahead of many chasers who had followed that cell in Nebraska but had to drive South into Omaha to cross the river into Iowa. We were in perfect position in the inflow notch and watched/filmed as the wall went right past us. We could hear hail roar and there was a big hail shaft about a mile to our north, so we stayed close to the car in case we needed to take off in a hurry. I got a very nice photo (below) which shows the huge, well-defined structure in this supercell. The cell acted like it was cycling and wanting to produce so we followed it all the way to Elk Horn, IA. Chaser convergence along HWY 59 near Harlan was insane and it took us ten minutes to get across the highway. We did see several funnels and the whole storm system was fairly picturesque, but this thing just didn’t have enough energy to drop a tornado. We decided to break off and hit a fresh cell back by Persia again, but it didn’t produce anything either. I got some fairly good storm structure pics, so I was happy. We also had some funny photo ops during the trip. We broke off our chase around 9:30pm, but then I had to drive Eric back to his car in Rock Port, some 125 miles away. This made for a LONG night. I didn’t get home until around 2:30am Monday morning, but at least I didn’t have to drive through rain.

PS> I later found out my chaser friend Danny Murphy was hit by lightning from this storm system. He survived but has ongoing complications. 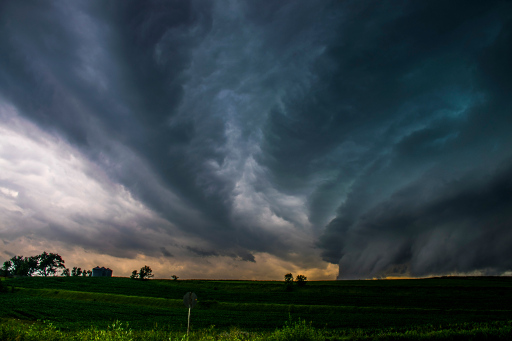