I began my day parking/waiting near Lincoln NE, then moved South to Beatrice. The late morning SPC update moved the target area out of Nebraska into Southern Iowa, and I foolishly headed that direction without looking at any current weather data (I am embarrassed by this – I try really hard not to be an “SPC Chaser”). Several other chasers fell for the same thing. Of course, I am halfway to Nebraska City when a line of storms start popping up West of Beatrice along the frontal boundary, so I did some hasty backtracking and hopped on a cell. It started weakening, so I headed toward the next cell up the chain. It was difficult to visualize cells from a distance due to high dewpoint haze and a spotty low cloud deck. The new cell I was heading for went tornado warned – I was still 40 miles away driving like a madman safely at or below the speed limit toward it. A tornado was reported near Exeter, and I was just getting into intercept position about 12 miles to the NE of Exeter, hanging out in the inflow notch near Beaver Crossing. I started getting into some rain and small hail, so I moved further north up HWY 420 by the I-80 onramp (big mistake relying on I-80 for an E/W escape route). I hung out a little longer than I should have, and soon I was under the meso while inflow picked up to an estimated 80mph. It was picking up rocks and dirt from farm fields and pelting me. When I tried to get back in my car, surface winds were so heavy I couldn’t close my door until I turned away from the wind. A huge rain shaft appeared as the sky darkened substantially. It was a rain-wrapped tornado, heading right toward me. I hopped on I-80 East, but cars and trucks had pulled over and/or stopped right in the middle of the Interstate because of the heavy wind, rocks, and low visibility. They had no idea what was coming straight for them! I was weaving through the stopped traffic as quickly as I could and found about 1/4 mile stretch of clear median to drive in until I managed to get enough distance to where I no longer felt like I was in danger. BIG lesson here.

I stair-stepped northeast for the next hour or so as the storm went north of Lincoln, NE. There was decent structure, but it was really dark and difficult to make anything pop photographically. Headed home to Des Moines, stopping at intervals to shoot lightning pics. 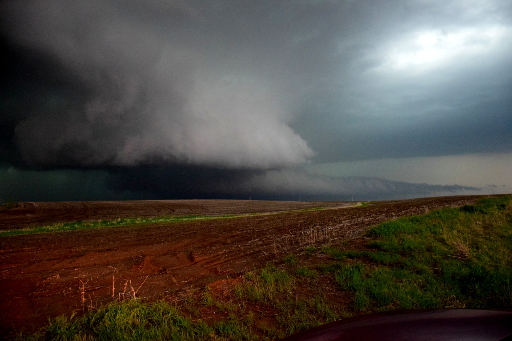 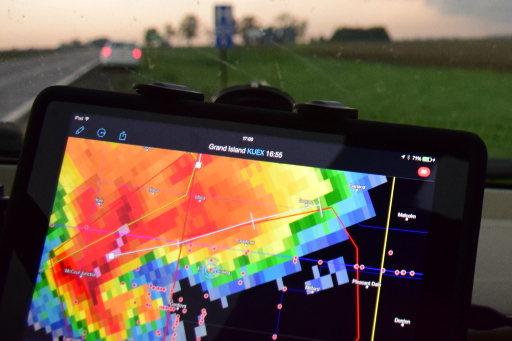 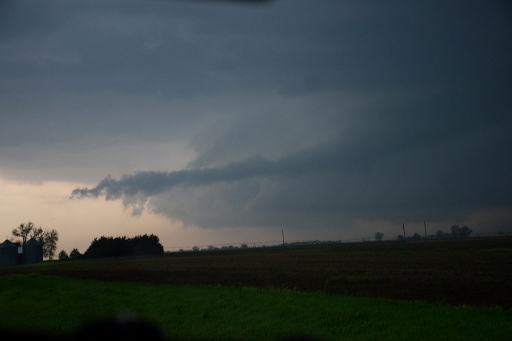