A cold front was projected to move through Nebraska. Conditions were in place for a reasonable possibility of isolated supercell formation before the entire front turned into an MCS.I left my office in Des Moines IA around 11am, but because forecast models and HRRR were in disagreement about several factors I had no target identified other than “south central nebraska sometime around 4pm”.

Heavy morning convection was taking its toll. There was a solid stratus deck throughout much of Iowa and small lines of ongoing thunderstorms already in progress throughout much of Nebraska. This wasn’t looking good for development of discrete supercells. Even if an isolated cell popped up, storm mode was questionable because of 2+ inch PWAT values everywhere and lack of upper-level wind support. Everything pointed to high precipitation crapola.

From Lincoln, NE I could see some clearing with blue skies to the southwest, so I decided to head for that area as it looked to be the only chance for insolation/heating of the boundary layer in the entire state. This might be irrelevant because of the cold front, but shear profiles were slightly better that way as well.

I took a 30 minute break in Beatrice NE to look at updated weather info and check work email. During this break I learned that ghost pepper chicken wings from Taco Johns are nasty. I decided to head 30-50 miles further west and play the boundary of a small warm front along the Nebraska/Kansas border. Shortly after heading that direction, some healthy looking cells started popping up in north central Kansas, around the Belleville area. I shot down that way just in time to see a slow-moving barrel-shaped wall cloud hovering over a nearby field (pic below). There was a tiny amount of rotation, and it was heading right for me. I didn’t see any way to get in better position (I didn’t want to be directly under it) without going the wrong direction first, so I went north into some moderate rain about 2 miles, then turned around and headed south again to get on the “good” side of it. Just before I got to a clear spot, I was hit with a healthy dose of wind – could this be a small RFD gust?

A lot of chasers were in the area watching this wall cloud and we all jockeyed for position on a gravel road as we followed it along the Kansas/Nebraska state line. This was a really funny looking wall cloud, but it did have discernable rotation and it had a radar-indicated TVS (Tornado Vortex Signature) at this point – just no visible tornado.

Over the course of about 45 minutes, this cell went from slowly moving NE, to moving due East, and it was picking up some speed. Additionally, the hail core shifted around to be NW of the updraft, which is somewhat unusual. Within another 20 minutes the cell began heading ESE and the hail was to the west of the updraft. SO WEIRD. Also, difficult to chase something heading ESE while trying to stay out of path of a potential tornado *and* avoid hail.

It was starting to get dark, the cell appeared to be losing strength and I didn’t want to go any farther south into Kansas as I was already a long way from home on a weeknight so I broke off and headed home. As I passed Beatrice NE I could see huge towers 80 miles away at the Iowa/Nebraska/Missouri state line being illuminated by the setting sun. I was hoping to have a nice lightning show on the way home, but no sooner had that thought crossed my mind when a very low cloud deck overtook me. It was almost like ground fog but 300 feet overhead. It was still really humid from rain so I guess I shouldn’t be surprised by this.

There was a craft beer store in Lincoln NE enticing me to stop, but it’s quite a way off the highway into the city and there was a squall line in central Nebraska (remember that cold front?)  heading straight toward Lincoln. Hoping to grab some O’dell IPA (which at that time wasn’t sold in Iowa) I raced the squall and took my chances at the beer store. With heavy lightning in the distance and lots of red on radar, I packed my car with beer and headed to the Interstate, intending to get in front of the line and race east ahead of it. This was not to be. Too many red lights and slow drivers. KABOOM! My car was then consumed by some of the heaviest rain I had seen in years. On the Interstate, visibility was terrible and traffic had slowed to 25mph. There was no way I could get in front of this HP mess now, and I drove the remaining 200 miles home with white knuckles in torrential rain. The things we do for good beer. Ugh. Painful drive home. Long and painful. 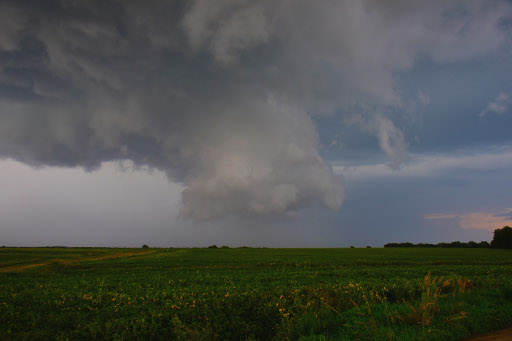