Weather data was showing good shear, moderate CAPE and decent moisture levels 5 days in advance of this event, so I had been looking forward to “Day 1” for nearly a week.

I left Altoona at 5am, with my initial target being Ponca City, OK.
The drive down was moderately sucky, with fog and overcast skies most of the way. I got a “nowcast” from my chase partner Kirk (who couldn’t make this trip) recommending HWY 281 between Medicine Lodge and Pratt, KS as a target. I was barely through Kansas City when he texted, so I immediately set course for Medicine Lodge. I made it as far as Kingman, KS and things just didn’t feel right. It was getting even more overcast the further West I went, and I wasn’t able to visually determine where the frontal boundary was. I decided to head south and east for clearer skies, where there was a better chance for the sun to provide essential surface heating.

I ended up in Wellington, KS, where a small group of other chasers had congregated. We hung out there for a few hours when decisions had to be made – There were cells starting to fire along the frontal boundary starting in Oklahoma all the way up to Illinois. Our best chance looked to our West, so some of us scattered back toward Medicine Lodge while others decided to wait and/or play the line only a few miles west of Wellington.

There were a few cells banded in a line west of Medicine Lodge, all with healthy hail cores to their northeast. I knew I wanted to be on the southernmost cell, but getting into a good position meant I needed to go through the hail core being dropped by one of the other cells. NOPE. Not feeling like losing a windshield today.

West of Medicine Lodge touches an area known as the “Red Hills”. It’s not only poor chase terrain because of hills, but there is marginal cell-phone coverage and the road network ranges from “okay” to “non-existent”. The main highway had gravel/dirt/grass shoulders, which were muddy because of heavy rain. The dips in the roads caused localize flooding, and were a hydroplane hazard. There were hundreds of other chasers on this system, so any *good* place to pull over already had a dozen cars there. UGH.

So anyway, I was trying to see the storm cell in hilly terrain, while trying to avoid hail and heavy rain. Whenever I saw something worthy of a picture, there was never a place to pull over. I got into some fairly large hail by accident, but managed to get out of it without damage to my vehicle. I took a few pics when I was in a good position (which didn’t happen often). The storm cell was tornado-warned and was cycling funnels. I could see a funnel from the distance but was too far away for a good shot.

At sunset I called off the chase. On my way back home I ran into Skip and Brindley – two chasers I had been hanging out with in Wellington a few hours earlier. Brindley showed me some pics she had (she is a phenomenal photographer!) of their tornado intercept. They were on the same cell I was but at a difference location. They had ground circulation and 100 percent confirmation of a tornado. Amazingly, the timestamp on their photo was only 2 minutes from my funnel cloud photo, so I am going to call my pic a tornado, and write off the fact I couldn’t see the ground interaction because of my distance. Success for 2015!

While I was prepared to spend the night in Kansas, I decided (foolishly) to drive back to Iowa, since it was looking like another chase day the next day in Illinois. While on the LONG drive home somewhere East of Emporia KS, I ran into Blake – another chase I had hung out with in Wellington. What are the chances of that? 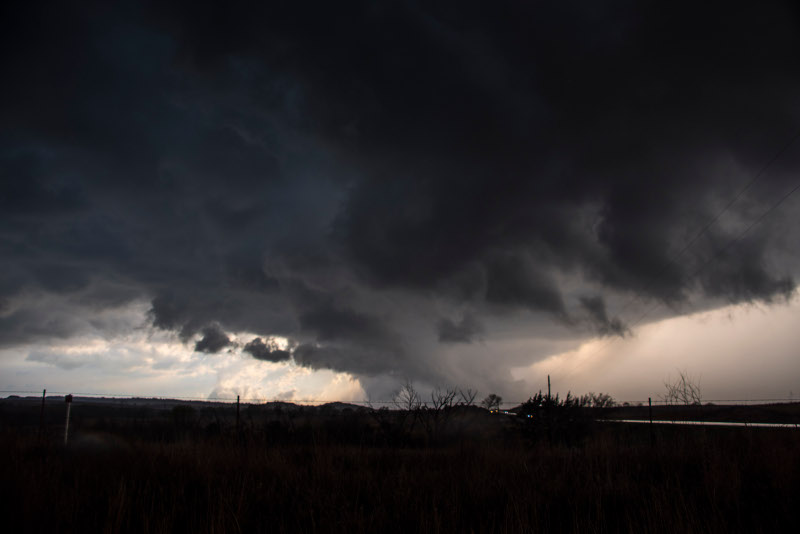