Forecast parameters were off the charts and midwest chasers had been watching and waiting several days for this event – most of them headed to Wisconsin or North-Central Illinois.

As always, morning convection was causing issues. It wasn’t clearing out so the boundary layer could heat up plus there was a lot of atmospheric capping. Good shear, though…

Luckily, I was chasing with Kirk today, who thought we should hang in Iowa rather than follow the legions of other chasers to Illinois. We headed out to east-central Iowa (Iowa City general area). The sky conditions were dismal. It was overcast with lines of storms carrying embedded cells. Visibility sucked and there was light rain/fog everywhere. We made a quick practice run up to a cell near Swisher, IA, but could barely get eyes on it. We followed it Eastward for maybe 10 miles, then chose to drop back to I-80 and head West a bit. We parked at a gas station and waited, watching updated weather data. Kirk was very interested in what was happening in front of nearly stationary cold front parked near Des Moines. As we reached peak heating, skies begand to clear a bit. Soon an interesting storm popped up near Indianola, IA, heading slowly SE. We were near Williamsburg, IA, maybe 80 miles away. We headed that direction rapidly, anticipating we would catch up with it somewhere near Ottumwa. About 30 minutes later the storm was definitely intensifying and it went severe-warned. We were excited because it looked like there were only a handful of other chasers in the region, so we wouldn’t be competing for viewing locations.

The storm was near Lovilia, IA when it went tornado-warned (per Sheriff’s visual). We were just clearing Ottumwa and still had a good 25 miles to go before intercept. Kirk pulled up SRV on the radar, and this thing had a very large, clearly defined velocity couplet – there was a LOT of rotation showing up on radar at 5,000 feet (the storm cell was about 50nm from KDMX, so beam height comes into play). This was exciting!

We were flying driving safely on HWY34, anticipating we could intercept near Albia. It was important we get to Albia before the tornado because the only decent route south – HWY5, intersected with HWY34 in Albia. We were only a few miles East of Albia, when one of the worst things that could ever happen on an active chase, happened. ROAD CONSTRUCTION WITH A PILOT CAR.

Decision time.
Kirk had radar up and the storm was still a few miles NW of Albia. We were just on the outskirts of town, but MAN, this would be cutting it close, since if we continued forward we would effectively cut off our escape route to the East. There was a long line of cars and trucks in front of us. I decided to pull to the right of them and drive on the shoulder until we could get the attention of the guy holding the stop sign. He came over and we showed him the radar. I told him in the interest of public safety he should consider holding the line of cars back until after the storm went through Albia, because once on the other side of that construction, they wouldn’t be able to retreat. I also asked if we could go in front of the line once the pilot car came back because we were trying to intercept the storm. Just then, the pilot car arrived and he waved us in ahead of the pack. We soon cleared the construction zone and within minutes we were arriving in Albia with a clear visual on the storm cell about 2-3 miles distant. We parked in a gravel lot next to the Albia HyVee grocery store and took a few pics. Radar SRV was still showing some serious rotation, and we could see powerful inflow jets being pulled into the rain shaft, but the tornado was completely rain-wrapped and 100 percent obscured. The cell was moving straight toward us and we knew we couldn’t stay put much longer. We exited south on Hwy 5, then parked again about a mile down the road. I was amazed because there was only one other car (Illinois plates) we could identify as a chaser. Several other people were pulled over to watch, but they all appeared to be locals. Sadly, there are a number of Amish communities in this area, and we saw several horse-drawn buggies on the road, one of them an “open air” buggy with no protection. I felt awful for these people, and I sincerely hoped they were hurrying home to safety.

The tornado was totally rain-wrapped and the cell was now solidly HP. The road network where we were wasn’t very good, so we had to go way out of position to avoid it to coming rain/hail, and eventually decided to break off the chase. Soon after, we were inundated by some of the heaviest rain I have seen this season. We inched our way through it until we were back on Hwy 5 and could head north back through Albia, where we saw EF1 tornado damage (as determined the next day by the NWS) to the HyVee store right by where we had been parked. [picture 2, below – courtesy of KCCI.COM]

The rest of the trip home was uneventful, and it was nice to be back home before dark. 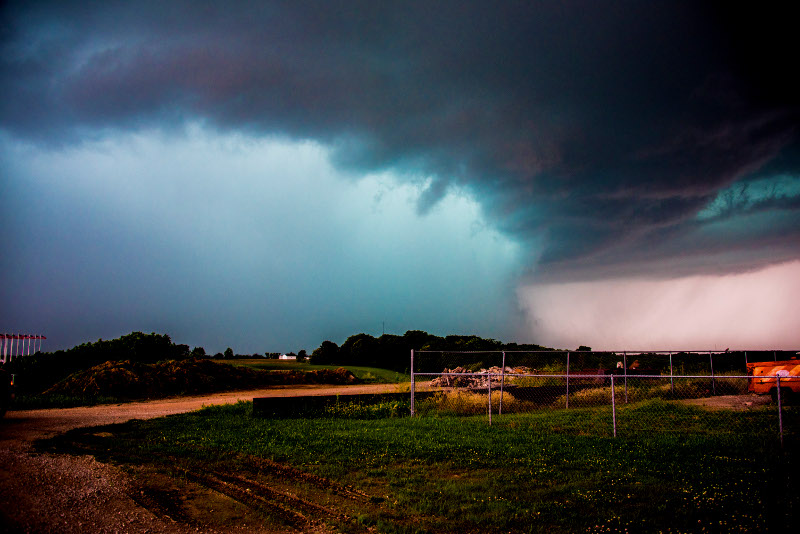 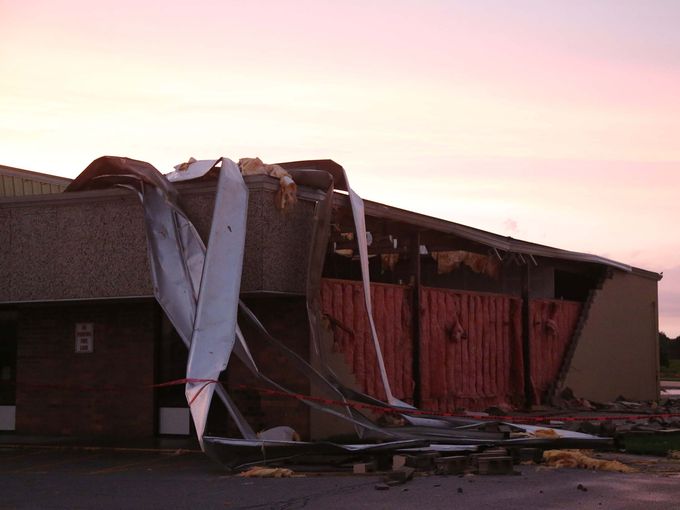