I left my motel in Wichita Falls, TX for a leisurely trip toward Childress. Ongoing morning convection, cool surface temps and a low stratus deck wasn’t a good sign. Since it didn’t look like things were going to be changing any time soon, I stopped in Vernon, TX for an oil change.

Visible satellite showed a finger of clearing reaching into the panhandle, so I continued to Childress right about the the time storms started to initiate. Lack of capping meant storms would fire early, and sure enough a storm fired up in the middle of this mess. Visibility was awful, and it was actually foggy in many areas. Terrible for chasing, but I was already in Texas, so what else should I do but chase?

I raced a hail core to Childress, arriving in the city and finding a car wash to hide in just as it hit. Some guys on motorcycles pulled into the stall next to mine, and came over to look at radar. Moderately heavy rain caused local flooding in Childress, but now that the hail core was past me, I wanted to take a look at the updraft so the chase was on! I intercepted the storm north of Childress. Even though I had good position it was difficult to see. This was one big ground-scraping meso and ceilings were only 300-400 feet so I had to be very close to even see it. There was a clearly defined couplet on SRV radar, which helped me navigate when I didn’t have eyes on it. As expected, it was dark, diffuse, embedded in a sloppy line and the exact opposite of photogenic. I decided to hold position so it would cross the highway about a mile in front of me. Road options were somewhat limited in that direction and I had the choice of continuing across the Red River and cut over on Highway 62 to follow this system into Oklahoma, but there was a healthy cell popping up down by Paducah and heading directly toward me so I drove south through Childress to intercept the new cell – which of course promptly dissipated.

My friend Andrew was in Wichita Falls and said he had clearing skies there, so I thought it best to go for the surface heating and better visibility and headed East to hook up with him. Just as I got to Vernon, a group of cells southwest of Quanah went tornado-warned and were heading toward Quanah. That was only 30 miles or so from Vernon, so I headed to Quanah. Just before Quanah I had a South option which would put me in a good position. I headed South on 1167, then turned West onto Four Corners Road. It looked like red gravel, but in fact this road was essentially cake batter. It was extremely slick, and I knew immediately this was not a good situation. I opened my door while driving to see how deep the mud was, which invoked a nice but considerably unwelcome safety feature in my Jeep – the parking brake turned itself on, causing me to slide and create a rut.

I tried to back up slowly, but surface winds were picking up to the point where I began sliding toward to ditch. Next thing I know, I am in the ditch and completely stuck. I was right in the path of this tornado-warned cell, *and* the ditch I was in began to flood. Could this get any worse? Yes. Yes it could. The HAIL started.

I tried calling for a tow from nearby Quanah, but the tornado sirens were going off there (rightfully so) and the tow operator wouldn’t go out when the sirens were on.

So I basically got to ride out this tor-warned cell. Inflow winds were rocking my car, and hail was coming sideways. My location was flooding rapidly. I rocked my car back and forth until I was straddling the ditch to offset flooding as much as I could. Just then, a pickup truck backed in and honked for me. To exit my car I had to step into the ditch. Waist-deep mud. I soaked my cellphone and wallet, but I am not complaining! I grabbed my camera bag and abandoned ship just as quarter-sized hail began. My rescuer slammed his truck into gear, drove about 100 feet, and another powerful wind gust blew us right across the road into another flooded ditch. We were completely stuck, and it was hailing sideways. The guy who picked me up was a local guy rather than a chaser, and he was starting to freak out. I took a quick look at radar on my phone and it wasn’t good. We were in a TERRIBLE position. The center of rotation was minutes away from passing about a half mile to our West, and shortly afterward a hail core with 3.75 inch hail from a trailing system was tracking straight toward us.

It was surreal sitting in someone else’s truck in a flooded ditch watching my Jeep flood a few hundred feet away, while hail battered us. Flooding was a real issue and I was getting concerned we would have to abandon both vehicles with no place to go other than hold on to a nearby fence as our cars washed down the road and 3.75 inch hail beat us to death. Yay.

Just then, another pickup stopped, got out a tow chain and pulled us from the ditch. The guy who rescued me (and to whom I am eternally grateful for his attempt) shook my hand and tore out of there while the road was still passable. I don’t have a trailer hitch so I was still stuck. The guy in the pickup who had just stopped said a park ranger was on his way and I sat in his truck for a few minutes, watching the hail on radar creep toward us. I told him we had about 10 minutes, then I was going to grab my tablets from my dashboard and we would need to head back to the main road and head East quickly to escape the hail. No sooner than the words came out of my mouth, the tow truck appeared!

I told the guys in the tow truck we only had a few minutes or we were all going to lose glass. Luckily the rain had stopped so flooding was less of a problem. They had me out of there in no time ($220 just to pull me out of the ditch!!) but I would have gladly paid ten times that. I got in my Jeep and made a hasty retreat to Vernon TX for the night. Just as I was arriving in Vernon… It was hit by a tornado and power was out all over the city.  OMG WILL THIS DAY NEVER END? I was wet, cold and muddy. My Jeep (which I had bought a mere 4 months earlier) had hail damage and a cracked windshield. I showed pics to the hotel clerk and she upgraded me for free to a jacuzzi suite. Ahhhhh…. 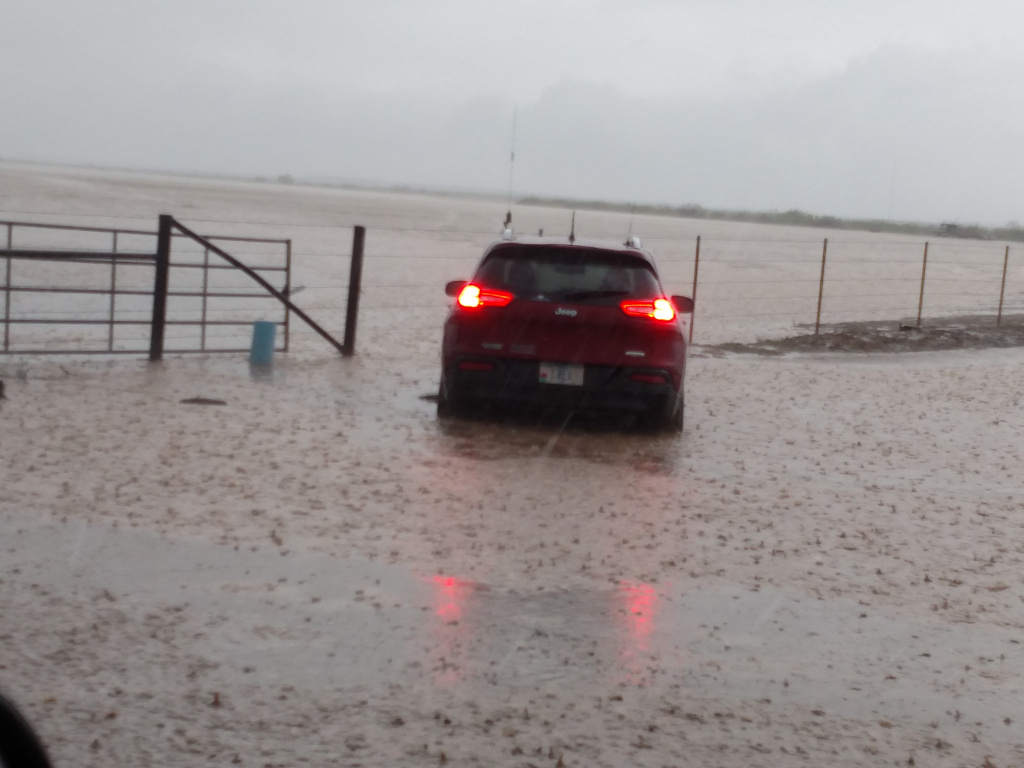 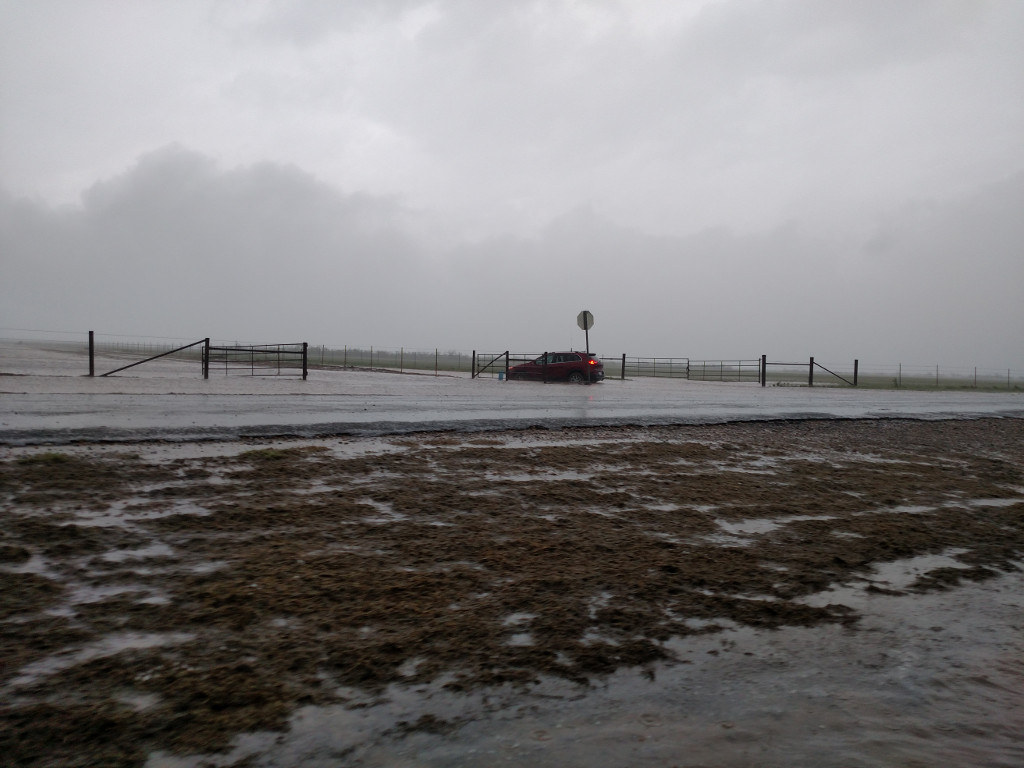