After our total bust in Kansas the day before, I had a tension headache from driving home in heavy rain and decided to stay home from work today. I woke up around 9am, head still throbbing. At 10am or so, Zach Sharpe from the Iowa Storm Chasing Network texted and asked if I had looked at the HRRR. I saw the SPC had SW Iowa in a 2 percent outline and I hadn’t planned on chasing, and as such hadn’t looked at any real weather models. Apparently the surface low was nudging the warm front farther north into a more sheared, somewhat primed environment. Visible satellite showed clearing in SW Iowa, so with sunlight heating up the boundary layer, we would have decent instability. Unable to resist, we packed the car and headed to SW Iowa – initial target was Creston. While enroute, the National Weather Service in Des Moines issued a special weather statement. Everyone in the car – ME – (Todd Rector, Zach, and Daniel) smiled, as it validated our forecast. The 11:30 SPC update still showed 2 percent, but at least they didn’t take it away from us.

We stopped in Creston to gas up, and decided to head further West. Shortly after leaving Creston, a tornado watch was issued. BINGO!

An isolated cell popped up south of Red Oak and appeared to be strengthening. We headed toward it. We were about 15 miles northeast of it when it went tornado warned – perfect position to intercept.

Zach started setting up the livestreaming equipment, Dan Auel was navigating and we went into “active chase mode”. Soon enough we arrived at the intersection of HWY 34 and HWY 71, about 2 miles north of Villisca, IA. We decided to head south on 71 and park. We had a good visual on a slow moving cell with a wall cloud on it about 3 miles directly to our West. Moderate inflow from the East at the surface.

The cell was moving slowly NNE and looked to be ready to pass over or near the town of Stanton. We moved North and West to get closer to the wall cloud. It appeared the ceiling was starting to drop, and we were in some moderate rain, which reduced visibility. Ahead of us about 150 yards we could see a rain curtain and outer circulation under the wall cloud, with definite ground interaction ( aka “The Bear’s Cage”) so we stayed in place for safety. County law enforcement flew down the road while we watched. I was a bit surpised they were not blown off the road.

When it was safe to do so, we proceeded west behind the rotation, then took a road north to get into position beside it. Being WEST of a rotation is not a preferred position, but this was already a low visibility, low ceiling situation so there would be nothing photogenic about this anyway.

Law enforcement had blocked the road in front of us. In this situation we would normally talk to the highway patrol and request passage, but we were in a decent position so there was no need. Within 30 seconds we visualized a tornado to our southeast, about one mile distant. We shot a few minutes of video. Right about the time we considered moving north and east to get closer, the hail started. Ping-pong ball hail. Not big enough to break glass, but big enough to elicit colorful verbs from the crew.

We positioned ourselves in a PERFECT spot, and the (now quite weak) tornado passed about 300 yards in front of us. Incredibly cool.

We live-streamed to WeatherNationTV during this event, and our video subsequently was the lead story on ABC World News Tonight, appeared on all national news outlets including The Weather Channel, WeatherNationTV, and Good Morning America.

Here is our Iowa Storm Chasing Network summary for the day

Here is the video sent to media outlets

Here are copies of our live stream to WeatherNationTV: Video1 Video2 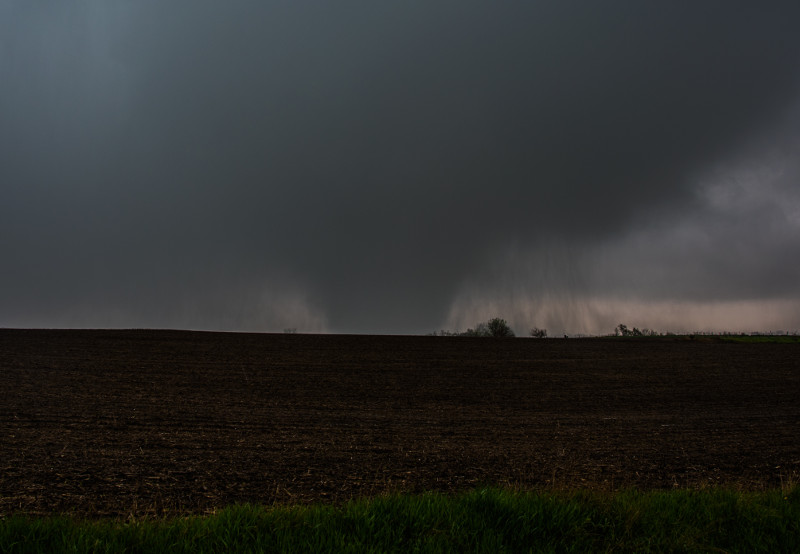