Summary: Went to Onawa and back…

Zach Sharpe and I left mid-morning, our target area somewhere in NW Iowa. We arrived near Onawa, Iowa in early afternoon as storms began to initiate. We were especially interested in a storm popping up about 25 miles West of us on the Nebraska side of the river, BUT (there is always a “but”), the only river crossing option within 35 miles was a rickety bridge, *and* the road leading across the river was under construction. A single lane with a pilot car – the bane of all chasers –  equal only in annoyance factor to long, slow moving trains.

Throwing caution to the wind Zach and I carelessly carefully calculated our safety cushion and entered the queue to wait for the pilot car, leaving plenty of room in between us and the car in front of us in case we needed to turn around. The pilot car came and we timed how long it took to get us across – twice that time should be the worst-case scenerio for returning across the bridge. Wheeee!

We positioned ourselves about 10 miles west of the bridge to visualize the cell. It had a nice shelf and was attempting to produce a wall cloud. It had a decent hail core, indicating a good updraft. Since it was moving due east, we decided to head back across the bridge to wait for it. Meanwhile, a chaser friend of ours from a large news network appeared nearby on Spotter Network. We waited in line for the pilot car, all the while watching the hail core on radar get closer and closer. Eventually the pilot car came and escorted us across the river. As soon as we reached Iowa, we proceeded east rapidly to the city of Onawa, where we met up with fellow chaser Brennan Jontz. Meanwhile, we saw our other chaser friend (news network guy) was stuck waiting for the pilot car and was getting pounded by hail. Heehee…

We followed this cell into Eastern Iowa (hilly terrain, but workable) until it moved into less favorable atmospheric conditions and began to dissipate. We headed back to I-80 and hooked up with some WeatherNation friends for dinner in Avoca, IA 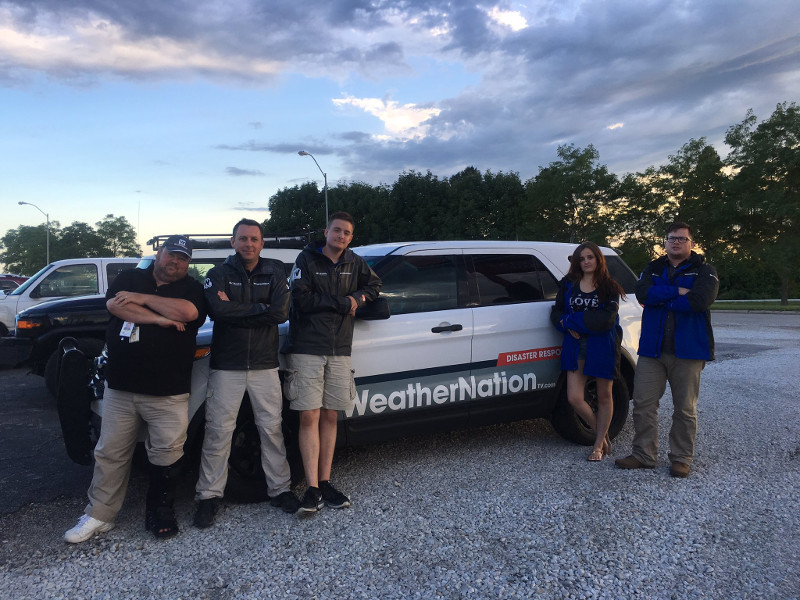