A powerful storm system was forecast several days out. Model runs were all over the place as to timing and location, put it seemed like the heaviest snow would be in north-central Iowa. Zach Sharpe and I reserved a hotel room near off I-35 near the IA/MN border, and headed up from Des Moines at 5pm. We anticipated the snow would begin around 10pm, so we had plenty of time to get settled in. We also figured the DOT would close the Interstate, stranding us near our hotel.

Heavy snow began around 9pm. The system was quite convective for a Winter storm, and reports of thundersnow (snowstorm accompanied by lightning – quite rare) was occurring to our south – So of course we had to try to capture it! We headed south on I-35 into moderate snow. We saw several instances of lightning. SCORE!

The snow began to get heavier and heavier. It was also a wet snow, so there were big flakes that accumulated quickly. Travel was getting difficult, so we decided to turn around and head back the 14 miles to our hotel. It took us nearly 40 minutes to drive 14 miles. There was little traffic, plows had not been out yet and there were no tire tracks to follow. The wet snow was sticking to the reflective delineator posts, covering up any hope we had of using them to determine our position on the road. Snow was about 3 inches deep at this point, and starting to drift due to high winds. Visibility was very poor. We managed to find our way back to the hotel. It was MISERABLE out.

It was now close to midnight, and KCCI News (Des Moines) wanted us out at 4am to do field reports, which means we needed to get video process and uploaded, charge equipment and be up by 3:00. Morning came quickly. Snow was about 7-8 inches in depth and visibility was poor due to 40mph gusty winds. Driving was nearly impossible, so we drove around the (plowed) parking lot of our hotel, looking for good locations. We did several live “phoners” and streamed live video for KCCI morning and noon news.

Video Recap of our morning:

KCCI acknowledged us on their Face Book page – complete with pics of us – which made us feel good about our coverage. 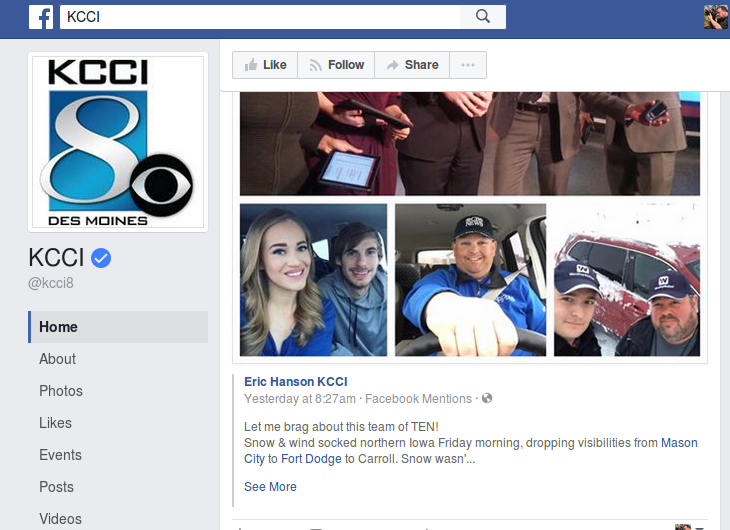